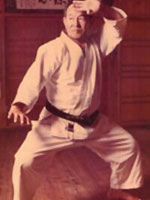 In 1963, Miyagi Sensei’s family presented Yagi Sensei with his teacher’s gi and belt, and gave him the Menkyo Kaiden, naming him the official successor to the Gojyu Ryu Karate system. Until his death on February 7th 2003, Yagi Sensei continued to teach and enrich Goju Ryu Karate Do, creating new kata and adding weapons training to the school. 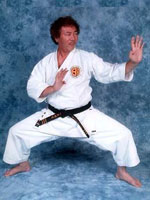 Until very recently Goju Ryu Karate Do was presided over by Yagi Meitatsu Sensei, the oldest son of Yagi Meitoku Sensei. He began his Karate training in 1949 at the age of 5, and trained under his father for over 50 years.

Yagi Meitatsu Sensei travelled the world to teach Meibukan Karate Do practicioners, including visits to Canada, the United States, India, Israel, Italy, England, France, Czech Rep, Slovenia and South America. He is also a founding member of The Okinawan Traditional Karate Do Kobudo International Study Center, located in Yomitan, Okinawa. Here, martial arts students have a chance to practice Karate Do in the place of it’s birth.